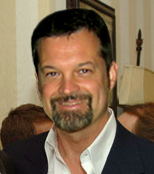 Rob Skiba is an award winning documentary filmmaker and the best selling author of several books including: Babylon Rising: And The First Shall Be Last and Archon Invasion: The Rise, Fall and Return of the Nephilim. As an “ancient Nephilim theorist,” Rob brings a unique and often unheard perspective to the UFO/alien discussion. As such, he has become an internationally recognized public speaker on these subjects, often appearing on paranormal and prophecy talk shows and as a featured, keynote speaker at conferences all around the world.

He has been an actor since the founding of his High School Drama Club in 1986, having appeared in numerous theatrical presentations across the country and several corporate and independent projects.

As a graduate of the Hollywood Film Institute, his life-long dream has been to produce powerful television and motion picture productions. He is currently working full-time on the development and production of SEED.

The website RobsChannel.com was designed to act as a sort of quick reference hub to access most of Rob Skiba’s content all on one site. We hope you enjoy the material access through that site provides.

If you have been blessed by Rob Skiba’s ministry, please consider contributing to its continued growth and outreach potential.

Please note, Rob’s ministry is NOT a 501c3,
which means the ministry is not regulated by the government,
nor is he able to give you a tax deductible receipt for any contributions.